The Ballad of Waverly Hardwick, Stanza 3 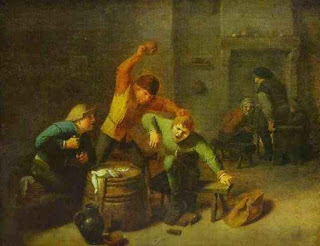 Waverly steps out of the tavern and looks around to the town guards posted on the street.

Do the guards look at Waverly?
(1) No, and they just begin to apprehend a passerby as Waverly comes out.

Waverly does not stay to see what the guards are arresting the man for. He decides to find the Erelong Manor to investigate Norman's possible whereabouts before meeting Theodoric by the lighthouse at sundown. Waverly heads south on Old King's Road toward the docks.

What kinds of buildings does he pass on his way to the manor? (roll on Maze Rats Buildings Tables)
Clockmaker.
Bakery.
Market Place.

Waverly comes into the marketplace.

What are the names of these three factions? (watchout4snakes)
blue person, material weapon, above doom

As Waverly arrives in the heart of the marketplace, he sees three groups of men in heated conversation. Waverly hears something about the “Silver Prince,” “Steel Blades,” and “Thunder Clouds."

Is Waverly able to conclude that these are names of various factions within the city?
(4) Yes, but things turn violent before he can get a sense of who they are or what they're fighting about.

Waverly glances around. Are there any town guards in the marketplace?
(3) No, but onlooking citizens have run off calling for the guards.

Is there enough room on the street to continue by without getting caught up in the fight?
(3) No, but there is a side alley that looks like it might take Waverly to River Road and around the disruption.

Waverly decides not to wait for the guards and instead ducks down the alley.

Does it take him to River Road?
(1) No, and he soon finds a group of men at the end of the alley. They are armed and do not look friendly.

Waverly sees the men and stops in his tracks. He looks around.

Are any of the men behind him blocking his escape?
(3) No, but there are men to either side of him within striking distance if Waverly tries to make a run for it.

Who is the leader of the group? (Kassoon and Knave Character Generators)
Gunter Reid
Description: Wears torn clothes, and has drawling speech. Has a sinewy physique, a sunken face, rosy skin and bald head.
Personality: A rambunctious noisy drunk he knows how to make people feel guilty. Energy wise he seems alert and responsive.
History: He was raised happily, as a normal child born to his father and mother. His father taught him the rudiments of the Shipwright arts, while his mother instructed him in etiquette, music and courtly manner. Over the years he perfected his riding and shooting skills. As of late he has gathered a gang of other desperate men to ambush any poor soul that wanders into their den within the twisted alleys of Ayn Harbor.
Motivation: Wants to raise his children well. And he will attempt to ambush and attack anyone he thinks he can take on with his gang if he thinks they coins in their purse.

Waverly decides it unwise to try to turn his back to the men. He attempts a smile and nods to the man he assumes is in charge.


“Are you now? Where were you trying to get? Nasty part of town you ended up in. You from around here?”

“I’m trying to get to Old King's Road. A fight broke out back in the marketplace. I didn't want to get involved. I thought maybe I could get around it through this way. I suppose I was mistaken. I’ll be on my way.”

Do the men respond in a threatening way?
(6) Yes, and they draw their swords and surround Waverly.


“Heh. You’re not going anywhere without paying us tribute first. Empty out your pockets and we’ll let you go on your way.”

Waverly holds up his hands and slowly brings out his coin purse and throws it to the man’s feet.


“There. That’s everything I have. Now please let me pass.”

Do the men put away their swords now? (unlikely)
(5, 3) No, but the other men crowd around Gunter to look into the coin purse as they go through it. They seem not to be paying as much attention to Waverly and the path behind him is clear.

Waverly decides to make a run for it. Do the men follow him? (likely)
(3) No, but they call out to him and threaten him.


“Keep running, ya bastard and don’t come back this way! You insult us with a measly seven copper  as tribute? If I ever see you in my streets again, I'll kill ya!”

Waverly comes back out into the marketplace.

Have the guards arrived to deal with the disturbance by this time? (likely)
(1, 4) Yes, but the riot has escalated and it looks as though some of the men have been gravely injured by weapons. They lay in the street motionless. Pools of blood flow out from under their bodies. Waverly thinks they may be dead.

Are there any of the guards nearby not currently apprehending those involved in the fight?
(6) Yes, and a pair of them come up to Waverly now. They have their hands on their sword hilts.


“Stop right there, young man! What is your business here?”

“Praise the Lady you’ve arrived. I was just passing through the marketplace when this fight broke out. I thought I’d try to go around it through this alley, but I ran into some men who took away my money at sword point. Please, I’m a stranger to this town I need that money back. Can you do anything to help me?"

Do the guards help Waverly get his money back?
(3) No, but they aren’t unfriendly.


“Hold up, there, hold up, son. We’ve had a busy day. We will deal with your problems when we have the manpower to do so. If you haven’t noticed, we’ve got our hands full with these damnable rebels. This is the third disturbance this week. We’re running out of space in the stockade for this scum.”

The other guard looks Waverly over.


“You look alright. Are you hurt at all?”

“No. I threw them my purse and ran. I was no match to take them all on.”

“Smart. Your life is worth more than coin. How much did you lose?”

“It was only seven copper. But still. It was all I had and I’m a stranger here. I need that money to get home.”

Do the guards do or say anything to assure Waverly they’ll help? (likely)
(4) Yes, but they can’t do anything right now.

The guards let go of their sword hilts and look back to the rest of the town guard currently ushering the rioters away to a cart. The first guard looks to Waverly.


“Glad you’re alright, son. As we said, we have are hands full. You’re obviously not from around these parts. It’s best to stay on the main streets here. Getting mugged is a common occurrence down the darker paths. Stay away from there, would you?”

The second guard chimes in.


“I don’t have any coins on me, kid. Wish I did or I’d give them your way. I’m sure that lute you’re carrying would be more than enough to get back what you lost and then some. You’re lucky they didn’t take it.”

“Luckier than you know. I probably would’ve been stupid enough to fight them had they tried.”

“Maybe you can find work in the taverns here? We don’t have many minstrels come to this part of the world.”

“Thanks. I’ll keep that in mind. Say, maybe you guys could answer a few questions about something else?”

Will they stay to answer more questions?
(4) Yes, but only a few.


“Sure, son, make it quick. We’ve gotta transport this lot to the stocks and get back on patrol.”

“I met a guy up near the town gate at an inn. The Prince and Lion? His name is Theodoric Barney. He asked if I'd heard of him. I haven’t. Have you? Can you tell me anything about him?”


Do the guards claim to know Theodoric Barney? (likely)
(3) No, but they give each other a knowing look before answering carefully.


“Sorry kid... We don’t spend time at the Prince and Lion. Too far from our patrol routes. I know some guys that go there though. They might be able to tell you more, but couldn’t be sure."

“Ok. I am supposed to meet him, but not sure I can trust him. He wants to meet me somewhere at sundown. He didn’t want others listening in on our conversation... Sounds kind of fishy, right? Do you guys patrol around the lighthouse?”

Do the guards ever patrol around the lighthouse?
(3) No, but there’s no need to. A pair of town guards mans the lighthouse at night.


“Nah, no need, kid. We take turns manning the lighthouse at night. Probably the best gig we town guards can hope to be assigned. It’s the only modicum of peace we seem to get around here these days. You’d be safe meeting those robbers down there during the darkest hour of night. No criminal would be stupid enough to do anything outside of the lighthouse.”

The first guard cuts in.


“Ok, ok. We’ve gotta get moving. Anything else we can help you with?”

“I'm wondering if you know of the Erelongs? I have business with them and heard that they live in a manor further south from here."

Do the guards have any more information regarding the whereabouts of the Erelongs or their scheme with the animals?
(5) Yes.

What do they have to say? (watchout4snakes)
abolition passage (I don't know what that means, I'll generate another result)
challenging convict
Aha! Putting all four of those words together gives me an idea. The Erelongs were accused of being in league with the rebel factions (Steel Blades and Thundering Cloud) and accused of stealing powerful magical artifacts from the private collection of the city's current ruler (the Silver Prince). None of the artifacts they were accused of stealing have ever turned up and the Silver Inquisitors are having trouble finding any substantial connection between the Erelongs and the stolen artifacts. Unknown to the Silver Prince, the stolen artifacts were being smuggled out of the city in the stomachs of livestock.

Will the guards tell any of these details to Waverly? (unlikely)
(1, 1) No, and they tell Waverly to stay away from their manor and to not ask any of the other towns guards about them.


"Fitzhugh and Elsbeth Erelong were placed under arrest last month for crimes against His Majesty, the Silver Prince of Ayn Harbor. I cannot comment on the charges as the investigation into their crimes is ongoing. You ought to not bring their names up or you may find yourself a person of interest to the Silver Prince. And you do not want to become a person of interest to His Majesty, the Silver Prince of Ayn Harbor. We need to go now. Sorry we couldn’t be of more help. Stay on the main streets. And stay out of these dissenters’ way if you want to stay out of trouble.”